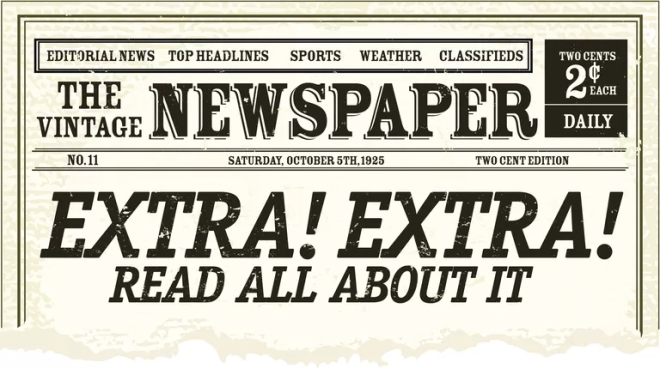 My friend Casey recently told me that the newspaper is great for when you want to know what happened 24 hours ago.

As a former newspaper guy who started his career on a manual typewriter back in 1978, Casey’s honest truth really hurt.

No one is wanting the newspaper — all of them — to succeed more than me. But I see what’s happening all over the country (and world, I guess). People are seeking their news sources online with instant alerts for which they aren’t likely to pay a dime.

There’s nothing earthshaking in that news. It’s a reality that we all know. How many people under the age of 30, no, 40, no, 50 are newspaper subscribers? A handful; 5 percent? 1 percent?

In fact, Pew Research recently released results of a survey that showed more people now get their news content via social media than the newspaper.

Some of my former newspaper colleagues are discouraged because they are convinced that if the paper would just (insert remedy of choice), subscribers would come back. I’m afraid that ain’t happening.

Subscribing to a newspaper takes commitment, financially and in time.  It’s the model from, oh, 1990 and earlier. Young people aren’t buying it, literally. You know why? They were never newspaper subscribers in the first place.

I wish I had a magic potion.

My ideas tend to run toward things like a cool app similar to that of Starbucks where I can put money on my account ahead of time and draw it down as I consume coffee (or, newspaper content).

More analysis and less breaking news from 24 hours ago might help. But there’s always that obstacle of free content.

So what’s the answer?  The papers (all of them collectively) are going to have to figure out a way to make their online content so alluring that folks like Casey would be willing to make a small monthly investment.

That’s the model that The Athletic sports site is pursuing, although I think it’s too early to call it a success.

Meanwhile, I’ll just fetch the latest edition of the paper off my driveway for as long as it lasts. I don’t want the physical newspaper to disappear, even though I can access it online.

I’m from Generation Past.

Once upon a time, virtually every house on my block had a paper out in the driveway before daylight.  Now it’s only on my driveway and one or two others.

Recently, I was at a local hospital waiting on my daughter’s appointment when a nurse came by. I was reading my paper.

“Ooh, we don’t see many of those around here these days,” she said. “Where did you get it?”

I had some breaking news for her.

“Off my driveway this morning,” I said.

Then there is my friend Casey, who assures me he loves the newspaper and always has. “Just not enough to subscribe to it,” he said.