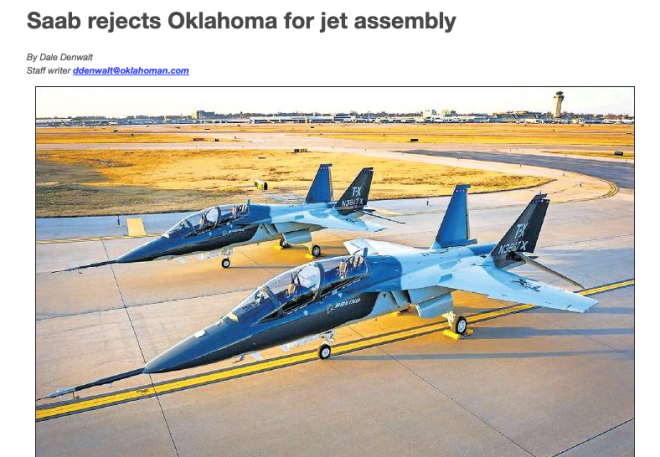 I hope you saw this story in Monday’s editions of The Oklahoman about the Saab Group, a Swedish Aerospace firm, reportedly passing on Oklahoma as the location to build a new military trainer jet because of workforce concerns.

If you didn’t read it, click this link to catch you up to date:

The reporting by Oklahoman reporter Dale Denwalt made the words of Oklahoma City businessman Phil Busey seem almost prophetic. The story quoted State Sen. Adam Pugh, who said that the Saab Group decided it would not be able to find enough skilled workers to sustain its workforce at an Oklahoma location.

Saab reportedly wanted to know if it could find people to work at the plant. ‘In the end, they decided they couldn’t, and so they’re taking their business somewhere else,’ state Sen. Adam Pugh told members of Leadership Oklahoma at a recent aerospace forum.

Busey is founder and CEO of a company called Delaware Resource Group (DRG), minority-owned aerospace industry federal defense contractor. DRG employs upwards of 700 people, including software engineers, worldwide who support contracts with the U.S. Department of Defense, as well as major aerospace companies such as Boeing and Lockheed Martin.

I recently had the opportunity to interview Mr. Busey along with Debbie Cox, my colleague from the Oklahoma Center for the Advancement of Science and Technology (OCAST). Our interview was the basis for an OCAST video and a column I wrote on behalf of the agency. You can read it and watch the video interview here.

We were surprised by the urgency that Busey showed in advocating for an improvement in public education and workforce development across our state.

“Our challenges really come back to the issues of workforce development,” Busey told us. “Public education is the No. 1 challenging issue we see here in Oklahoma.”

That means that we need to build a deeper pool of young Oklahomans equipped with STEM skills that are critical to the sustainability of the state’s aerospace industry.

But it goes beyond workforce development, he said. It’s also about the image of our state that is reflected in legislation like the recent open carry law that allows virtually anyone in Oklahoma to carry a gun without a license or shooter education.

“The challenge is that we are having to rebrand ourselves,” Busey said. “The social legislation issues, the open carry issues and the public education issues all have to be addressed. Because people really don’t understand who we are … We have to talk to them about what our culture is really like, who we are, what kind of values we have, that we are inclusive, that we have all types of development going on with MAPS and the successes we have had downtown.”

The bottom line is that there are currently between 1,500 and 2,000 open positions here in Oklahoma in the high paying aerospace industry. We have to fill that pipeline.

Busey has organized his own working group of community, education and business leaders to brainstorm ways to enhance Oklahoma’s workforce development and improve our image.

“We’re trying to develop pipelines with our universities,” Busey said. “And then be able to talk with people who we need to recruit from outside Oklahoma that it is a good place to live. We all don’t walk around with 45s on our hips. Public education, we have to do something to improve that. It is a deal breaker.”

Editor’s note: I was invited by my friends at OCAST to attend the recent Blockchain for Business conference here in OKC. This is what I wrote about the experience and what I learned from the event about a subject that I know very little about.

There is a huge gulf between the emerging blockchain-for-business technology and the cryptocurrency world, a group of 150 Oklahoma business leaders learned at the recent Blockchain for Business conference at the Baker Hughes/GE Energy Innovation Center.

The blockchain primer delivered to the Oklahoma audience by Alan Dickman, IBM Blockchain Architect, contrasted the two computing networks that are often confused for one another.

“Blockchain is really just a shared, distributed ledger that helps record transactions,” Dickman said in his keynote presentation. “Blockchain facilitates business processes that are shared among a network that is using the same ledger.”

What blockchain-for-business is not is a giant, worldwide computing network that requires every member of the network, or peer, to update their blockchain file with each transaction, Dickman said.

“That sounds like Bitcoin, where there are lots and lots of peers around the world, and what you are doing is updating each ledger,” he said. “Only a small number of blockchains have that infrastructure.”

Blockchain-for-business can limit the number of peers, and requires that each participant be identified and invited to the network. Transactions are recorded as an “immutable” record that can never be altered.

In contrast, Cryptocurrency networks are known as “permission-less,” which means that participation is unlimited. Participants can remain anonymous. The “permission-less” networks can grow unwieldy and consume large amounts of energy as each transaction is updated.

“From OG&E’s perspective, the business purpose of this conference was two-fold,” said Richard Cornelison, economic development manager for OG&E. “We wanted to bring a better understanding of technology, and ways to communicate to the communities we serve and into the companies we serve.”

“Blockchain is one of those emerging, potentially enabling technologies that has the capability of impacting our economy,” said Mark Ballard, programs officer with OCAST. “We’re interested in this technology because it can give businesses another opportunity to compete more effectively in the economy.”

Jim Stafford writes about Oklahoma innovation and research and development topics on behalf of the Oklahoma Center for the Advancement of Science & Technology (OCAST).

Made a trip to the Apple store in Penn Square Mall today, and all I got was this lousy photo of a sign on the dark storefront promising me a brand new store.

Problem is the store has been closed for remodeling and expansion since April. That’s like six months and counting on a remodel.

So, I headed upstairs to visit the temporary location that sort of matches the look and feel of the original Apple location.

Compared with the times I’ve visited Penn Square in the past, the mall was a virtual ghost town today. Few people were out and about, and you could almost hear an echo as you walked down the mall.

That didn’t prepare me for the size of the crowd milling about the Apple store. I should have known.

Apple’s retail location in Penn Square is a virtual tourist attraction, with big crowds no matter the day of the week. Today was no exception with a store full of shoppers, or at least tire kickers like me.

I asked an Apple Genius – well, he had a beard, tattoos and wore a blue Apple T-shirt – when the new/old location would open. He said there was no specific date set, although he said that opening by the even busier Christmas shopping season would be nice.

Here’s a photo of the store at 4 p.m. on Wednesday afternoon as I entered.

OK, about three or four years ago I began a novel. I’ve written one chapter. It’s sort of an action-adventure-drama-mystery. I’m probably going to scrap it and pursue something different. But I thought I might post the chapter here to see if I can get any feedback. I still haven’t made up my mind, but check back in a day or two and see it is posted.

My life changed on Oct. 31 when I left my long-time “home” as a business news reporter at The Oklahoman. This blog is a first step toward setting roots as a freelance writer and consultant. Stay tuned.