The idea of a “seniors only” hour of grocery shopping lured me to Crest Foods in Edmond this morning.

Turns out the tip I received from my wife last night was a bit of fake news. Crest doesn’t filter shoppers by age at 7 am,  despite what she may have read on social media.

“We don’t limit shopping to seniors because we’re open 24 hours a day,” the Crest employee who scanned my groceries at the checkout counter told me. “We’ve discussed it, but it would be difficult to limit it to just seniors.”

Here’s what went down for me when I rolled into the Crest parking lot at 6:57 this morning.

First, I was surprised to see the parking lot was already loaded with cars in the predawn darkness. After finding a parking spot, I walked into the store, passing several shoppers who were decades younger than me on the way in.

Inside, it could have been prime grocery shopping hour – say, 4 p.m. on any given Sunday – because the store was swirling with shoppers. Carts were at a premium, but I snagged one as I walked in. Sorry, lady.

The large crowd made it difficult to maintain proper social distance. We also had to negotiate aisles that were full of cardboard boxes as Crest workers were working to restock shelves as the day began. 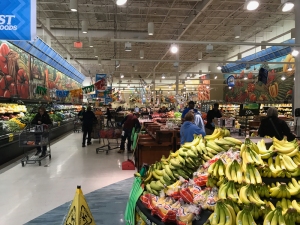 The bread aisle reminded me of Broadway Extension at 5 p.m. when lanes are packed and traffic inches along. The bread shelves were mostly bare.

Checkout lines were the longest I’ve seen at Crest, which normally moves people out at an efficient pace.

But there was a positive to this morning’s experience. Toilet paper! The store had a virtual wall of toilet paper available at 7 a.m. So we early birds got the TP worm on this morning.

By the way, Homeland Stores in the OKC area ARE providing a seniors-only shopping hour beginning at 7 am each day. Here is a story in today’s edition of The Oklahoman that talks about the senior hour at Homeland and other venues.

Stay safe out there!